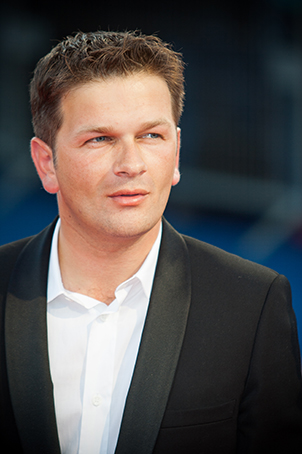 Gaël Morel grew up in Beaujolais, in a working-class family. From childhood he was fascinated by cinema, actresses and in particular by Catherine Deneuve. He first thought of a career in theatre direction but quickly turned to film making, convinced that “film directors are the basis of everything”.
This «everything» explains why today he prefers the word filmmaker, author who conceives makes and accompanies his work. The term «filmmaker» embodies the recognition of the work of artistic creation and is more appropriate than that of director.
At 18, member of a youth jury at the Festival de Cannes, he meets André Téchiné, who will cast him in the lead role of his film “Wild Reeds” ( “Les Roseaux Sauvages “) in 1994. Thereafter, he will play very little, for Téchiné essentially, because he admires him, and will devote himself to film making.
Closely linked to Elodie Bouchez and Stéphane Rideau, his partners in Wild Reeds, he chooses Stéphane Rideau for the leading role of his first short film, La Vie à Rebours (1994) but also for the first long one A toute Vitesse (Full Speed) (1996). Portraying a tormented youth, the film is presented in Cannes, in the category Cinemas in France.
After a TV movie made for the channel Arte, Première Neiges, he left for Algeria to shoot his second opus, Les Chemins de L’oued (Toronto international critic award in 2002), a reflection on identity disorder and political unrest. With Le Clan (Three Dancing Slaves) (2004), he pictures a state of the modern male condition.
For his fourth feature film, Après lui, a film about mourning presented at the Directors’ Fortnight in 2007, Gaël Morel directed “his idol” Catherine Deneuve.
In 2008, Arte broadcast his second TV movie, produced in 2007, New Wave with Beatrice Dalle, that has just been freely adapted by André Téchiné and Celine Sciamma (When you’re 17). In 2011, he produced Notre Paradis (Our Paradise) the story of a male prostitute at the end of his career, Vassili, who assassinates his customers. His youth, and especially his downfall, is at the heart of this film.
Gael morel has currently returned to the cinema sets. For his sixth film, Prendre le large (Catch The Wind), the filmmaker chose Sandrine Bonnaire to play Edith, 45, a worker in a textile factory whose life is turned upside down by a social plan.