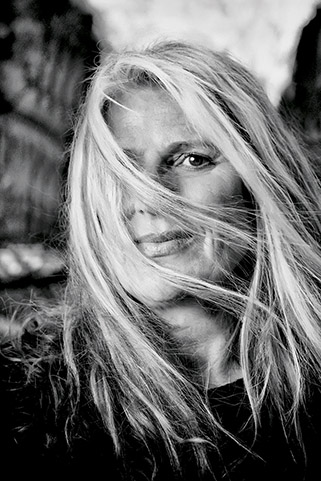 Brigitte Sy begins her film career in Daniel Duval’s 1979 The Gataway – also called The Life– staring Miou-Miou, before becoming a muse to her fellow and filmmaker Philippe Garrel, with who she works as a scriptgirl on the 1985 movie She Spent So Many Hours Under the Sun Lamps, but mostly as an actress : Liberté, la nuit (1983), Les Ministères de l’art (1988), Emergency Kisses (1989), I Can No Longer Hear the Guitar (1991), than as the hero’s mother in Regular Lovers (2005), portrayed by their son Louis Garrel. She often takes on discrete and eclectic suporting roles; Istvan Szabo’s 1991 Meeting Venus with Glenn Close, Raoul Ruiz’s 1996 Genealogies of a Crime with Catherine Deneuve, Jean-François Richet’s 1997 Crack 6-T and Vincent Ravalec’s 1998 Cantique de la Racaille. Brigitte Sy leads during about ten years theater and cinema workshops, in prison, with inmates men or women, hence in her an idea of a spectacle, which becomes Annette Lève l’Encre, created in 1997, in TV-Duplex, between the Health Detention Center an the Théâtre de Chaillot in Paris. From this experience is born the desire to direct a movie, the 2008 short-film The Best Place. Which engages the writting of her first feature film Free Hands, airing in 2010, with Ronit Elkabetz, Carlo Brandt and Noémie Lvovsky. In the meantime, Brigitte Sy directs a documentary Fruits de mer (2009), with Catherine Kapusta-Palmer, who evokes, at an alcoholised meal, sexuality, relationships, self-surrender, denial, and seropositivity for the collective « Silence = Mortes », 10 short-films against AIDS, about women HIV. In 2015, she directs a second feature film : Astragal, adaptation of Albertine Sarrazin’s eponym novel, starring Leila Bekhti, Reda Kateb, Esther Garrel. Juror : Pantin’s 2016 Festival and Valenciennes’ 2017 Festival.

Passionate about cinema for several years, I’m enthusiastic about being a member of a professional jury. I have really discovered cinema with Star Wars and then with Quentin Tarantino’s movies. His works have strongly marked my cinematographic tastes. I have then discovered plenty of short and medium-lenght films on the internet, and really liked this format. A medium-lenght film I particularly adored is Kung Fury, directed by the independant studio LaserUnicorns. I find cinema to be a very noble art, which allows to easily convey feelings, or messages. I, myself, wish to make my contribution to this art by pursuing studies in the audio-visual field, in order to becomme a director.

Jean-Christophe Bouvet is a french actor, director and writer. From a young age, watching TV, he’s passionate about moving images. At the age of 14, he discovers Jean-Luc Godard and realizes that cinema is also an art. In parallel, he takes Jean-Laurent Cochet’s dramatic arts class.
Jean-Christophe then does multiple roles for big filmmakers : Vecchiali, Biette, Téchiné, Chabrol, Pialat and Godard- to only quote them. Comedian, at the theater, in Feydeau’s Occupe-toi d’Amélie staged by Pierre Laville and in Burgess’ A Clockwork Orange staged by Thierry Harcourt…
Actor, in television films and series like Spiral, Ladies of the Law or more recently Woke. His nombrous cinematic and theatrical parts should not make you forget that Jean-Christophe also is a director and a writer. He directs short-films and clips and realises his three life dreams: being Claude Chabrol’s first assistant for his television films (1978-1980), climb Cannes’ stairs with Jean-Luc Godard (with 2004’s Our Music) and know and appreciate Brigitte Sy (2005-2018).

Spotted by a casting director at 15, Pascal gets the leading part of Catherine Corsini’s Lovers. He with that, discovers an intimist art house cinema. Since then, he works on films of filmmakers such as Gaël Morel, Laurent Achard, Paul Vecchiali, Pierre Léon, Jean-Claude Biette, Robert Guédiguian…
On television, he plays in Quatre garçons dans la nuit, a short-series directed by Edwin Bailly, and at the theater, in Valérie Mréjen’s first play Trois hommes verts. In 2008, Pascal directs his first short-film Valérie n’est plus ici, then in 2013 Monsieur Lapin, and in 2017 Hugues, rewarded with Pantin’s Côté cour festival’s Grand Prize.

Noémie graduates the Fémis’ photography department in 2007. She works for many years as a camera assistant on feature films and parallely directs two short-films. Her director of photography job brings her today to colaborate to a variety of projects such as fictions, documentaries, clips or advertising. Noémie notably signs the cinematography of two Sylvain Dieuaide short-films, including the most recent one Guillaume Drifting, which is part of the 2018 Césars’ selection. She also worked on the framing of Pierre Salvadori’s most recent feature film The Trouble With You that is to be released this year.

Having grown up in a cinephile familly, and ever since his childhood his hands often in paint, it wasn’t a surprise for Pierre to orient himself in art studies in Paris’ Arts Déco. Then, really fast, he started working on movies as a painter, and then a sculptor. Then, wanting to get a little closer to creation, Pierre became assistant of decoration and at times assembler. His meeting with Jean-Jacques Annaud changed his life, offering him passionating setting subjects to create, most of the time in distant lands. The cinema setting virus definitly ran through his vains !

Assistant operator, then operator for many years, Richard worked on tele movies, on advertising and short-films. After commercial ingenieer studies, Richard is Transpalux’s commercial responsible for almost 20 years. Indeed, the Transpalux group has for vocation to contribute to short french films’ development, which particularly matters to Richard. Passionate since the begining of cinema, notably lighting and framing, Richard keeps a link with the cinematographic profession by building partnerships with producers as part of his mission.